This is the next post of a series describing all RapidMiner plotters in detail. A list of the plotters discussed so far can be found at the end of this article including the links to them. Since many options and controls of these plotters are also relevant for the one discussed here - as well as for many other plotters - I recommend to check out the first part of the series before reading this one.

Before we start our discussion about the Series Multiple plotter, we will first have a look: 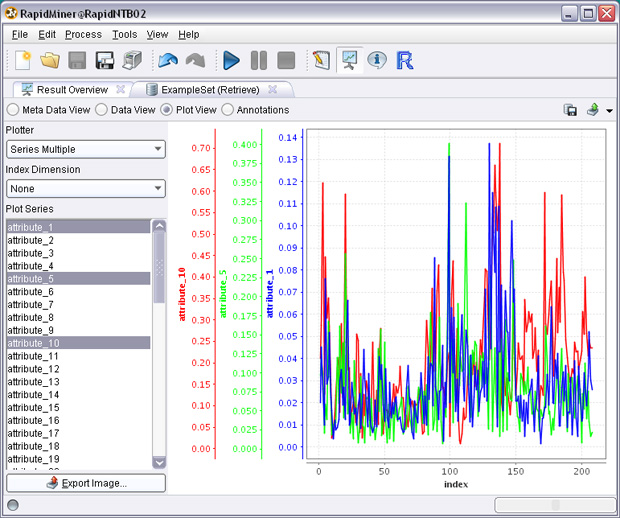 The series multiple plot is very similar to the series plotter discussed in the last session. Like the non-multiple variant, it is the basic reprensentation for series values, i.e. in cases where the values are ordered by a known or unknown dimension. It most often is used for time series plots where the x-axis is representing the time and the change of values in the series is plotted according to the value range depicted by the y-axis.

The series values have to be encoded in the attributes / columns of the data table. This means that each series is stored by a single column in the table. In the example above, we have selected three series in the Plot Series selection list on the left. The trajectory of those series is now plotted and each series gets its own color. Those colors are explained in a legend at the left of the plot together with the different value ranges. The fact that different ranges are used for the selected dimensions is the major difference to the traditional series plot.

Just as for the traditional series plotter, the multiple variant also offers a setting which is called index dimension. With this setting, you can select one of the dimensions which should be used for defining the range on the x-axis. If your data set contains, for example, a date column specifying on which date and / or time the measurements of the other series (the other columns) were taken, you probably want to define the date as index dimension.You can see an example for using an index dimension in our last session about the traditional series plotter.

The last option is pretty simple and does the same as for the other plotters: Export Image opens a dialog which allows you to export the current plotter with all its settings into one of the dozens supported image formats.

Other parts of the plotter series: