We are generating more data than ever before. Thanks to the data scientists who organize and analyze this information, this abundance of Big Data can be harnessed to serve the public interest in innovative ways.

In the last two post we have discussed about co - occurrences analysis to extract features  in order to classify documents and extract "meta concepts" from the corpus.
We have also noticed that this approach doesn't return better than the traditional bag of words.
I would now explore some derivation of this approach, taking advantage of the graph theory.

the graph of the co occurrences is really huge and complex, how could we reduce its complexity without big information…

Many customer behaviors have the flavor of a choice between two alternatives:  Yes or no.  Buy or sell.  Renew or cancel.  Suppose software called a “classifier” is available to predict customer choices in advance.  Would you use it?  Perhaps you’d like to test it to see how well it performs before you commit.  In this installment of my series on the nuts and bolts of data mining, I discuss the use of classifiers and questions about their performance.  Regarding performance, we specifically…

Understanding and managing risks due extreme events is one of the most demanding topics of our society. We consider this problem as a statistical problem and present some of the probabilistic and statistical theory, which was developed to model and quantify extreme events. By the very nature of an extreme event…

Are 4% mortgage interest rates a mirage?

I believe so. Here are some interesting thoughts on this:

You talk to a mortgage adviser at (say) Wells Fargo bank. You are interested in financing, own > 50%, have 2 salaries (your wife + yourself) that represents more than 50% of the amount you want to refinance,  can make a 30% down payment and have an external income…

Attensity, Teradata and Anderson Analytics talk on the future of text analytics

The text analytic market is set to exceed £635mln as businesses look to capture customer sentiment to gain competitive advantage.

Companies from industries as diverse as financial services, pharmaceuticals and online retail are today looking to harness the voice of the customer across social networks to improve their services.

The technology to capture customer sentiment is becoming increasingly sophisticated, responsive, and flexible to distinct business needs. Despite the…

From Semantic Search & Integration to Analytics

Semantics is seen as the key ingredient in the next phase of the Web infrastructure as well as the next generation of enterprise content management. Ontology is the centerpiece of the most prevalent semantic technologies…

Document Classification: latent semantic vs bag of words. Who is the best?

We have seen few posts ago an approach to extract meta "concepts" from text based on latent semantic paradigm.
In this post we apply this approach to classify documents, and we do a comparison between this approach and the canonical bag of words.
The comparison test will be done through the ensemble method already showed in the last post.

Example of Bad Analytics and How to Remedy it

This came in my mailbox as a sales pitch by Autobox, however I thought that it is interesting:

Since we are always interested in learning about how others do time series and testing how our approaches work vis-à-vis other dated procedures, we pursued the data and would like to share our results.

This is our first article in a series about good actionable KPI's to optimize various ROI. Future articles will focuse on metrics for fraud detection, user engagement etc. This one focuses on newsletter optimization.

If you run an online newsletter, here are a number of metrics you need to track:…

By STEVE LOHR. GOOD with numbers? Fascinated by data? The sound you hear is opportunity knocking.… 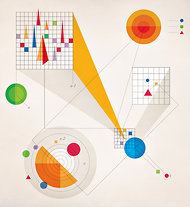 A very efficient approach to random sampling in SAS® achieves speed increases orders of magnitude faster than the relevant "built-in" SAS® procedures. For sampling with replacement as applied to bootstraps, seven algorithms are compared, and the fastest ("OPDY"), based on the new approach, achieves speed increases over 220x faster than Proc SurveySelect. OPDY also handles datasets many times larger than those on which two hashing algorithms crash. For sampling without replacement as applied…

Estimating Operational Risk Capital: the Challenges of Truncation, the Hazards of MLE, and the Promise of Robust Statistics

In operational risk measurement, the estimation of severity distribution parameters is the main driver of capital estimates, yet this remains a non-trivial challenge for many reasons.  Maximum likelihood estimation (MLE) does not adequately meet this challenge because of its well-documented non-robustness to modest violations of idealized textbook model assumptions, specifically that the data are independent and identically distributed (i.i.d.), which is…

Committee to Establish the Office of Financial Research

Australian website allows you to sell your financial spreadsheet template

We recently launched Vumero - a marketplace for Finance and Financial Modeling expertise - www.vumero.com…

I started my career in the communications industry, where I spent 20 years with a Tier 1 carrier in probably 15 different jobs across the entire organization: Marketing, Advertising, Product Management, Operations, Sales, General Management, Strategy and Business Development. I basically…