By Ian Morton. Ian worked in credit risk for big banks for a number of years. He learnt about how to (and how not to) build “good” statistical models in the form of scorecards using the SAS Language.

Is this a coincidence, or can we prove that from a statistical point of view, based on the theory of stochastic point…

Read the original KDNuggets' report on data science graduate programs. The text below is an extract.…

Shopper Alert: Price May Drop for You Alone | NewYorkTimes

When your grocery store bill is based on your profile...or another way for retail companies to optimize ROI via customized pricing (something all consultants, merchants and sales people have been doing for thousands of years, so it's not really new stuff)

R is now used by over 50% of data miners. R, Python, and SQL were the most popular programming languages. Python, Lisp/Clojure, and Unix tools showest…

Your credit card purchases mined by insurance companies | The Economist

To determine your premium. They check if you regularly purchase cheese burgers, cigarettes, alcohol etc.…

This chart was published in the Forbes magazine by Jon Bruner, and the data comes from the IRS tax stats tables. 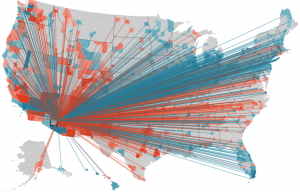 At least this is IEEE's viewpoint, if you read their recent article (front page) published in IEEE spectrum, September 2011. In a nutshell, they claim that hardware technology using Intel chips is better than software architecture to generate / simulate random numbers. See one of their prior articles at  …

New strategies to get a job offer: what's your opinion about this very aggressive approach?

With government killing business by requiring mandatory health care, mandatory sick days, and many other perks for employees (maybe salary indexation in the future), what do you think of a candidate who would say, during a job interview: