What is a Prediction Problem?

For example: Forecasting stock price for the next week, predicting which football team wins the world cup, etc.

What is Regression analysis, where is it applicable?

While dealing with any prediction problem, the easiest, most widely used yet powerful technique is the Linear Regression. Regression analysis is used for modeling the relationship between a response variable and one or more input variables.

In simpler terms,Regression Analysis helps us to find answers to: 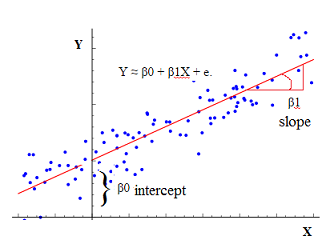 In the above equation, β0,β1 are the unknown constants that represent intercept and slop of a straight line which we learned in our high schools. These known constants are known as the model coefficients or parameters. From the above equation, X is the known input variable and if we can estimate β0,β1 by some method then Y can be predicted. In order to predict future outcomes, by using the training data we need to estimate the unknown model parameters (ˆ β0,ˆ β1) using the equation.

If the problem contains more than one input variables and one response variable, then it is called Multiple Linear regression.

How do we apply Regression analysis using R?

Note that the assumptions on the errors of the multiple linear regression model are not satisfied!

For example, huge residuals clearly demand a robust fit (e.g. using MM-estimation as in "lmRob" of R package "robust", or "lmrob" of package "robustbase"), and ACF of resid. may show autocorrelations with such dependent (time-ordered) data (e.g. using "acf(resid(model2))" in R.

It makes sense to base inferences or conclusions only on valid models. In other words, any conclusion is only as sound as the model on which it is based.

Thanks Justice Moses for the explanation. Will takecare of such things in future

Many thanks for throwing more light on some basics of regression models/analysis, well done.

The general regression model formula you presented at the top of the graph is correct.

However, the estimated regression model below the graph is quiet not right. Once you introduced the cap at the top of y (y with cap on top), you now have a fitted regression model whose expected error must be zero, ie E(e)=0. This means that you should have ˆy = ˆ β0 + ˆ β1x instead of ˆy = ˆ β0 + ˆ β1x + ˆe unless in multilevel model in which apart from allowing the observations at higher level to be correlated within the group, you are also allowing for complex level 1 residuals.