Here is one more example on how Predictive Analytics may help professionals to make better decisions. For this post a total of 3000 Social Media title posts where analyzed to gain -hopefully- important insights for Social Media professionals. To achieve this, Text Mining was used to analyze the text of titles, identify the most important subjects (do posts about Personal Brandingtend to be re-tweeted more than Social Media Monitoring?) and also try to prioritize the various areas of Social Media.
We start with the basics. Many of Social Media pros read (and write) about various subjects : How-to's, things to avoid, Adoption of Social Media etc). The first goal was to identify the most frequently occurring subject areas in Social Media posts using simple keyword frequencies. The following chart shows this information : 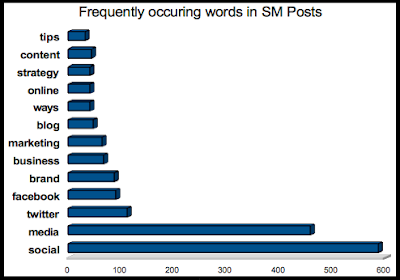 However, there is a slight problem : The chart shown above is about single words and perhaps measuring how often 2 adjacent words occur in Social Media posts could be more useful withSocial Media being omitted (click to enlarge): 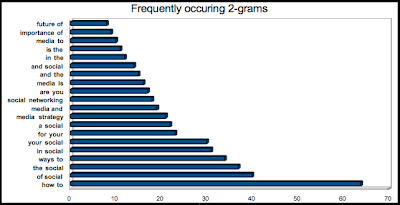 This leads us to the fact that most of Social Media posts where found to be about How-to's (note that phrases How to and ways to have similar meaning). One could dig more to identify the concepts for which How-to's apply (How to monetize, How to be successful, How to avoid mistakes etc)


The next goal was to find words and phrases that are commonly found in posts with a high number of retweets (>40). To get this insight various Text Mining techniques where used. The following features have been taken into consideration :
- Author of Post
- Title of Post
- Number of Retweets

and here are some of the results :

Words that have a negative weight tend to be found in SM posts with a low number of re-tweets (write, talk, trust, sentiment) while launch and America where commonly found in popular posts. Please notice (the reason will be explained later) that personal is one of the hot words but alsolink and increase.
With this information, an analyst may then identify why such words tend to commonly exist in popular Social Media posts. Here are some insights :