Challenges to Visual Analysis for Large Datasets
While data has been continually growing, the tools which to visualize and discover what is in that data have not significantly changed over the past ten years. Analysts are challenged with larger and larger amounts of information in which to find problematic trends and patterns, yet the tools they are using have not evolved to meet the demand.

Today’s analysts need the ability to visualize their entire landscape of information, not bits and pieces. The complex nature of fraud, internet crimes, network threats and finance demands a visualization tool that can holistically view and leverage the vast amount of information that is being generated in the technical age.

When an organized criminal ring is targeting your organization, hours could mean millions of dollars, yet those who are tasked with discovering these trends are outmatched when using today’s visual analysis technology costing time, valuable resources and your organizations assets.

Today’s online and mobile driven transactions have opened the door to a new generation of fraud. Hidden behind a veil of assumed anonymity and the ability to operate anywhere in the world has led to an increased emergence of organized threats to businesses who’s front door to their goods and customer information is no longer protected by brick and mortar.

Twenty years ago, credit card fraud was face to face crime carried out one by one against their victims. A credit card fraud ring used to rely on theft and counterfeiting to carry out their crimes. The complexity and risk involved limited their ability to conduct all but a few transactions per day.

At the same time, businesses were conducting only several hundred transactions a day at their physical locations. Detecting fraud was a task made much simpler by simple record review and investigation. Trends were much easier to spot as the number of fraudulent transactions were few and easily stood out among the legitimate within the documentation.

Twenty years later fraud is no longer a face to face crime. An organized credit card fraud ring can operate from thousands of miles away. The only risk and overhead involved is a laptop and an internet connection. Businesses are not processing hundreds of transactions a day at their stores, now it’s thousands at a location that is open 24 hours a day 7 days a week.

Thousands of transactions a day means thousands of lines of data, each containing a multitude of attributes now captured in eCommerce. Buried in among these gigabytes of attributes hides fraudulent transactions, but finding them has become the modern day equivalent of looking for a needle in a haystack.

While the world of organized financial fraud has become more sophisticated and wide spread, the tools to detect them have lagged behind, still firmly rooted in the days of brick and mortar face to face crime.

Fraud analysts and your business need a way to level to playing field. Businesses demand better ways to identify fraud trends much faster as in today’s eCommerce, hours can mean thousands of dollars in exposure.

SynerScope was created to quickly find the needle in the haystack of your transactions. Realizing that analysts need as wide of a view as possible of the important attributes within your data that identify fraud, SynerScope has been designed to visually show the relationships in your data and the sequence in which they occur over a much larger period of time.

Analysts require as much information as they can get their hands on to tackle today's threats. After all, how can you find the needle if you are only looking at a corner of the haystack.

Visual analytics in the past has relied upon finding relationships between entities through a one to one representation. A transaction is associated with an IP address, that IP address is linked to ten other transactions each represented as an individual entity. While this method was efficient when data and transactions were relatively small, it was inefficient when dealing with large amounts of information. 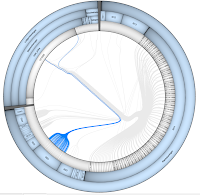 SynerScope, through the use of forced edge bundling and representing data through specified hierarchies allows the analyst to visualize concurrent relationships over a significantly larger set of data then previously possible. The larger the amount of data which can be visualized, the longer the period of time which is available to the analyst. This is key to the analyst’s ability to visually detect trends which run contrary to the normal flow business leading to much faster proactive identification of threats. 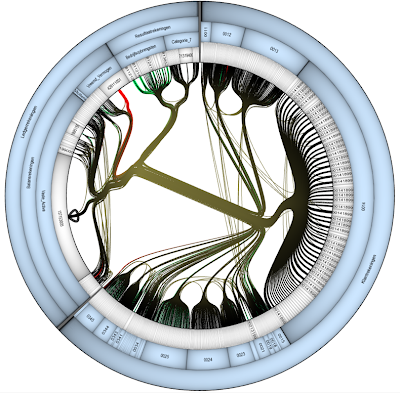 Just as important as the relationships which exist between entities within the fields of data is the time and sequence in which they occur. This has previously been overlooked in legacy visualization software where the analyst was able to visualize relationships or events over time but never both simultaneously.

Today’s fraud analysis requires the ability to detect fraud both as the events relate to one and other but also the sequence in which they occurred. SynerScope provides the ability for the analyst to leverage relational and sequential visual analytics within one workspace increasing the field to a complete 360° representation of the data. 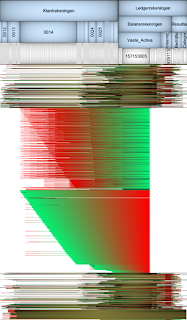 SynerScope has been designed to give the analyst all the resources required to visualize activity and relationships for effective identification within one workspace.

Within SynerScope's primary analytical space the analyst can view, drill down and manipulate their visualization through:

Comment by Rick Wicklin on November 4, 2011 at 8:58am
For a book on statistical visualization of large data sets, see Graphics of Large Datasets by Unwin, Theus, and Hofmann